There is no definitive origin for the word “doozy” but there are at least three main theories, the oldest of which is that it is an adaptation of “daisy,” which was used in 18th century England as a synonym for something or someone of high caliber.

Example: “That horse is a real daisy.  She’s well worth the price!”

Other etymological sources suggest it derives form the nickname for the Dusenberg, a luxury automobile introduced in the US in the 1920s.

A third possibility is that it come from the nickname given to Italian actress Eleanor Duse, who made headlines as beautiful and talented import to the New York theater world in the 1890s.

The definition has expanded in modern parlance from indicating something or someone superior to also including something that is extraordinary in its negative qualities.

Example:  “That test was a real doozy.  I sure hope I passed.” 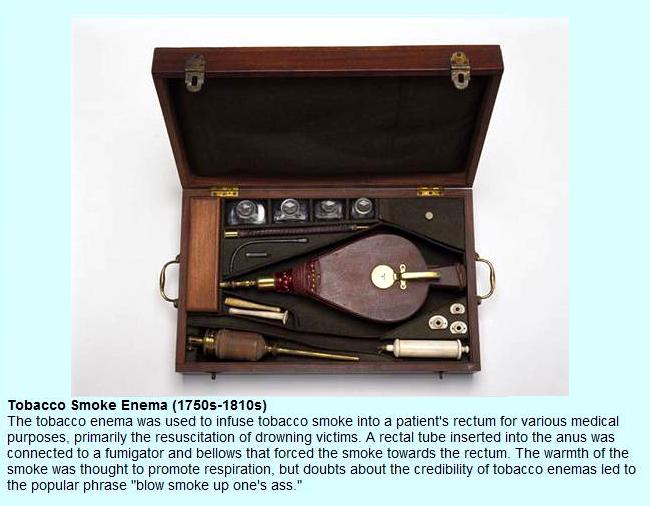 was used to push smoke into a drowning victim in order to warm the victim from the inside-out.

“…A rectal tube inserted into the anus was connected to a fumigator and bellows that forced the smoke into the rectum. The warmth of the smoke was thought to promote respiration, but doubts about the credibility of tobacco enemas led to the popular phrase “blow smoke up one’s ass.” Search on “tobacco smoke enema” for illustrations of the apparatus.”

The word “filibuster” can be traced back to a label given to pirates who marauded trade routes in the 17th and 18th centuries.   It originated from the Dutch word vrijbuiter, which literally translates to  “freebooter,”  [vrij (“‘free’”) +‎ buit (“‘booty’”) +‎ er].

The term spread across Europe with the Spanish and French translating it into filibustero and filibustier,  respectively.

Americans adapted the spelling and pronunciation to “filibuster” and expanded the definition to include mercenaries engaged in illicit military actions against foreign governments, referring in particular to Southern adventurers in Latin America.

In the mid-1800s, “filibuster” became popular in the U. S. Congress as a euphemism for delaying or blocking the passing of legislation by taking advantage of the procedural rules to hold the floor for inordinate amounts of time.    Senator Huey Long (D-LA) demonstrated a particular talent for filibustering, reciting everything from Shakespeare to recipes for Southern dishes for up to 15 hours at a time.

In the early 1700s, English critic and playwright John Dennis devised a new method of simulating the sound of thunder for his play Appius and Virginia.  The play was deemed a failure and its run at the Drury Lane Theatre was cancelled but Dennis’s invention caught on and was used in other productions without his permission, prompting him to protest.  His exact words are unconfirmed but it is generally accepted that he said something to the affect of:  “They stole my thunder!”

‘Wowser’ is a delightful word with an interesting background, though its ultimate origin is unknown.

The word first appeared in print in 1899, in the Australian journal Truth, and was instantly popular in Australia. It rapidly spread to New Zealand, where it remains in use, and then eventually arrived in England, possibly brought by the Australian troops who served there during World War I.

The American writer and editor H. L. Mencken liked “wowser” and attempted to introduce it to the United States. He used the word frequently in American Mercury, the literary magazine he edited.

Despite Mencken’s efforts, however, the term never became particularly popular in American English; it is used occasionally, but it never truly caught on.